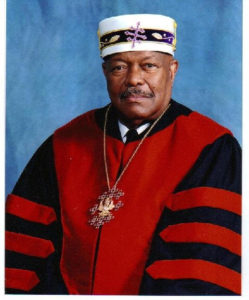 DR. SOLOMON WALLACE died at Jamaica Medical Center on March 30, 2016 in Jamaica, New York. He was 87 years old. Mr. Wallace was born on October 8, 1928 in Raleigh, NC to Aycue and Eliza Wallace; they had eight children. Wallace was the last surviving child from their union. Wallace attended Shaw University, in Raleigh, NC. After moving to New York, he continued studying at City College of New York. Shortly thereafter, he met married the love of his life, Gloria M. (Brown). This union was blessed to raise a daughter, Winnie Robinson Wallace Morgan.

Having served his country during the Korean conflict with distinction in the US Army, he received an honorable discharge. He retired after exemplary service for 28 years as an engineer for the Mayer Malbin Company of Long Island, New York. Wallace joined Samson Lodge No. 65 in 1964, and was elected Worshipful Master in 1968. He is also a member and past member and Past Patron of Gardenia Chapter No. 41, and an Honorary Past Grand Patron of Eureka Grand Chapter, Prince Hall Order of Eastern Star, Inc. State of New York. In 1967, he was one of seven Prince Hall Masons who founded the Prince Hall Day Care Center for 2-5 year olds.

Between 1983 to 1995, he was elected and served as the Most Worshipful Grand Master of the Most Worshipful Prince Hall Grand Lodge, State of New York. Throughout his leadership tenure, a focus on improvement of the Masonic Order and development of young people were paramount.

In 2012, the Sovereign Grand Commander received the honorary degree of Doctor of Humane Letters from Wilberforce University, Wilberforce, Ohio. Dr. Solomon Wallace was humbled by the honor.

Additionally, among his many accomplishments, Dr. Solomon:

His numerous community service activities include efforts on behalf of the following organizations:

As a direct result of his faith and dedication, he has been the recipient of numerous accolades, among them are:

In November 2014, Sovereign Grand Commander Wallace had the distinct honor of having a masonic lodge named and chartered in his name: the Solomon Wallace Lodge No. 125, chartered under the Administration of Most Worshipful Grand Master Dorian R. Glover in Syracuse, New York, to operate in the city of Watertown, New York.

In May of 2015, bronze full size bust of Sovereign Grand Commander Wallace was unveiled in Chicago, IL during the Annual Session. The impressive bust is now permanently displayed at the Scottish Rite Cathedral in Philadelphia, PA.

Dr. Wallace lived in service to his country, his family and work, the community, and foremost to his Masonic Craft. A devout Christian, he credited all his successes to our Heavenly Father, to whom Wallace has dedicated his life. He was an Ordained Deacon for the New Jerusalem Baptist Church of Jamaica, New York. True to his marital vows, he was the husband of one wife for more than 56 years.